Two teachers worked great! Doug had his lesson first with Joan. It was so great to have her back - first time since last fall. Their lesson went really well. Doug has made so much progress over the winter. Hurting his foot and having to ride bareback for a couple of months did wonders for his seat. Joan thinks they'll be well prepared for training level.
Then I had my lesson. It went well too. I didn't know how Rogo would react being back home. I was afraid he'd ignore us and regress again, but I think he's a little more grown up now. We did a lot of walk trot and finished with the canter. Everything was good - a couple of corner challenges but nothing serious. He didn't want to pick up his left lead canter, but he did with some encouragement. His canter has always been very nice as far as the quality of the gait (at Cheryl's), but it was pretty bad here - uneven strides, nose out and / or down,... I think it might be the footing. We had two truck loads of sand added to the ring and it's been spread and raked, but it's still a little uneven in places. Could be enough to through off a green horse still learning balance at the canter. We'll have to get that fixed up quickly and I won't do a lot of canter until he's settled here and the footing is settled too.
Maria and I were in Port Hawkesbury for work and I just got back tonight, so no riding today. 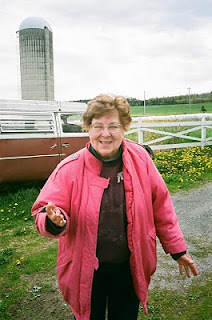 Here's a picture of Joan at our house to give me a lesson in 2008, that Verna just sent me.

And here's another picture Verna just sent me from her visit in 2008. Girls' party + too much wine = acting silly in my brand new show clothes - who can resist - those beeatches were egging me on 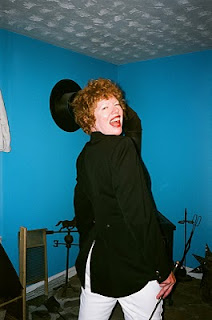 Anonymous said…
Looks like you had a lot of fun. Enjoy having your horses home and I hope they settle in quickly. I know what a bear it is to pick up that left lead canter, grrrr!
May 26, 2010 at 7:06 PM

Carol said…
Thanks! Yeah, left lead can be a challenge some days. He was great on it today, but for the first time ever bucked while cantering - damn, he's getting athletic :) Caught me quite by surprise!
May 27, 2010 at 2:21 PM