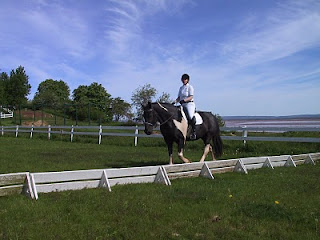 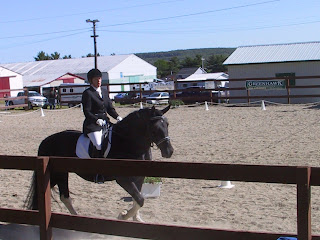 The story of how Joan Stoddard-Rhyno accomplished the impossible

"You'll never be able to show her, but maybe you can start lessons on her" Joan said as kindly as possible, while wondering what she'd gotten herself into.

I became reacquainted with Joan when I was 50 and it changed my life. She'd been my 4H riding teacher when I was in my teens but we lost touch when I moved away to go to college. Thirty years later I was back.

I'd always had a huge admiration for Joan and her abilities as a horsewoman. Her knowledge of dressage theory and practice are amazing. When I ran into her after moving back to Noel Shore I invited her to lunch and she graciously accepted. Laughing and talking over chowder and salad the years fell away and Joan offered to give me riding lessons again. This isn't an offer to take lightly. Joan had stopped taking students many years before and I wasn't exactly someone to tempt a top teacher back to the ring. I hadn't ridden in thirty years until buying a horse the year before and our two horses (my husband Doug rides too), while sweet and good on the trail weren't close to being suited to be competitive in dressage. Never the less, Joan made the offer (the gin and tonic worked!) and I jumped at the chance.

I was so excited I don't think I slept at all that night. I carefully outfitted myself over the next week in preparation – riding breeches, boots, dressage whip, … and finally the big day arrived – my dressage lesson with Joan! I had my appaloosa Dan saddled and ready and we got started. While Dan is very forward and willing on the trail he's never been fond of ring work and this was the worst day yet. He wouldn't move! As I tried to respond to Joan's instructions he wiggled sideways, squirmed, or simply planted his feet. It was a disaster. Realizing that at my stage I wouldn't be able to learn with Dan, Joan suggested we try my husband's half draft mare Savannah for our next lesson.

Poor Joan. Would Savannah be able to start me with some simple, basic lessons? She was clean and neatly turned out when Joan returned a few days later, but the positive descriptors stopped there. She was also very over weight (a bad experiment in free choice hay), shaggy and feathered like a Clyde, and completely out of shape after a winter of very little work. Savannah had some good things going for her though – she was willing to work and forgiving of my lack of skill.

Slowly, subtly the changes started – the weight whittled away, the feathers and shaggy mane were trimmed and her black and white coat began to gleam in the sun until it looked almost liquid. Muscles began to appear as the months wore on and her tendency to nervous anticipation was slowly replaced by quiet confidence. She greeted Joan at each lesson with a touch of her nose or placed her forehead on Joan's chest. She began to come to meet me when I went to the pasture to get her for lessons or practice and so the bond grew – Savannah, Joan and I.

One day Joan suggested, "You can show her, but don't be disappointed if you don't score well. Savannah can't produce the action needed to do well in the show ring."

Hmmm, to tell the truth I was more than a little intimidated to enter the same ring as the beautiful warmbloods I'd seen showing the summer before. I wondered if we'd be laughed at, or thought presumptuous for entering a show, but I was also excited about working towards specific tests and improving our score. I decided to put her in a show at Training Level and it's the best training / riding decision I've ever made. We had specific riding goals, suitable for our level of expertise, clearly laid out and a timeline for meeting the goals.

At 51 I was entering my first horse show. I had no idea it would be so complicated – memberships, licenses, entry forms, show clothes (what do you wear?), ordering boots from the U.S., show grooming and braiding, trailering, – yikes! Somehow we found our way through all of this and were ready for show day. My husband's riding teacher Megan was a magician at clipping Savannah for the show and teaching me her grooming tricks. Joan took charge of clipping her tail. Savannah had never had such white socks, clipped ankles, beautiful braids and thick, flowing tail. Where did that fat shaggy mare go and who is this stunning black and white show horse?

I tried to mentally prepare for a low score at the show, telling myself we weren't competing, just meeting new people and getting great feedback from the judge. "What are you going to do if you come first?" Joan said with a smile. What? And yet, that's what happened. Savannah came first in both of her classes at our first show and better yet, from the time we arrived until the time we left we couldn't have met nicer, warmer people who went out of their way to make sure we felt at home when they found out this was all new to us.

Savannah went on to score in the mid to high 60's at her next show and tied for Training Level champion and reserve high point champion (even after I rode her off course in one class).

At our last show of the season Savannah was awarded the season high point championship at Training Level and also won her first Level One class at her first gold show.

She'll never float across the ring in high level movements*, but each day, with Joan teaching us, we're becoming the best we can be. Savannah brings a big heart, rhythm, precision and a love of showing (who knew?) when she enters the ring. As she powers up the center line as straight as an arrow (described by judges as a "nice, bold entry") and halts perfectly square for the salute to the judge, she knows she's a winner.

Dressage is for anyone and any horse. Joan and Savannah are giving me a gift that transforms my life and leads to new challenges everyday. For 2009 we have two horses in training!

*Postscript – I've learned since writing this I shouldn't place limits on her.

I wrote this story for my teacher Joan Stoddard-Rhyno at the end of the '08 show season. Since then my western riding husband Doug got on her one day (she's his horse) and immediately gave up western and started dressage. He'll show her this year as I get ready to show Rogo.