I rode Rogo twice on day four too, instead of doing in-hand in the afternoon. The main focus of the day four lessons was canter half pass. The morning lesson was only 20 minutes because Rogo responded so well and we didn't want to over tire him.
We did half pass off the rail to the centre line and Rogo did the right lead quite well. This was the first time we did it off the rail (and second time doing canter half pass). Tuesday we did it from the 3/4 line to the centre line.
The left lead wasn't as good when starting from the rail. He moved over well, but didn't keep his bend to the left - his body became too straight. To fix this we started the half pass from a small circle. He still didn't hold the bend as well as he did to the right. Arthur suggests we circle again mid half pass, before he looses his bend, then continue in half pass.
His left is his stiff side so loosing the bend doesn't surprise me. He does better at this point starting from the 1/4 or 3/4 line when on the left lead, than starting from the rail. Arthur wants us to do shoulder in and haunches in at canter to help fix this, especially on the left lead, but on the right too.
I am supposed to collect his canter once he hits the centre line and straightens, but I wasn't very successful at that. It's part of our homework. I think I'm giving my outside leg aid too strongly in moving him over, and he gets quite forward.
Once we have this perfected and I can collect him on the centre line after the half pass, I should ask for a flying change and go onto a ten metre circle on the opposite lead, then continue down the centre line. This exercise is designed to introduce and school flying changes. If the horse and rider remain balanced and calm it can be repeated in the opposite direction, or do a large circle at the end before repeating, 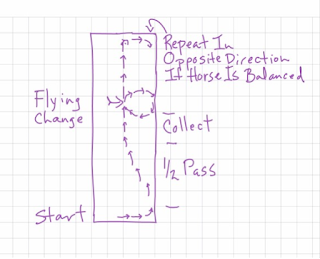 Arthur always gives home work for his next visit. In addition to the above exercise mine is to:


It was a great four days. I learned a lot and Arthur told us we'd progressed in our training and fitness, so that's motivating. He returns in November so we'll be working hard to get ready.