There Is So Much To Catch Up On

I've been crazy busy so am behind in my blogging. I want to write about so many things - the comments on gauging training progress, the comments on rollkur (wonder why nobody's started a boycott of companies that sponsor these riders?), my work travels lately (Lunenburg, Digby, Truro), learning to act as show manager for the last dressage competition of the season, my imminent vacation to Alberta and trip to Banff ...
Given I only have a few minutes, those topics will come later when I can do them justice (especially the comments which I loved). Tonight I'll write about moving the horses to their winter location. We move them to South Rawdon for the winter so that we can have an indoor ring to ride in for the winter. Last winter was our first time there. Before that we were in different barns. This is Cheryl Cassista's barn (she's a dressage judge and teacher). Joan will come there and teach too and Cheryl is happy about that. We have so much fun there.
I'm kind of sad about looking out and no horses though. Here is a view from my office window - you can see the circle in the sand (and several manure piles too!) - the last one I'll see before spring, and no horses. It looks so empty out there! 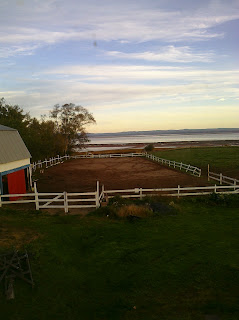 The exciting thing is that Rogo is beyond energized. We moved them on Tues. and I rode there today for the first time. You may remember that I've been wondering how to get / keep him motivated. He was very forward for three months in the spring (I couldn't carry a whip!), after a somewhat lazy winter, and then gradually lost it towards the end of June / early July.
Today it was raining and we were in the indoor. He was so anxious to go that he gave a little buck when I made him stand after I mounted. Then I had to do small (tiny) walk circles all around the arena in both directions to keep him controlled and focused. This is Rogo I'm talking about. He isn't like this. I sure wish I knew what made the difference. He isn't like this at a show, which is new to him and has no turn out. He wasn't like this last winter, so it isn't cold. What up? Anyway, he marched and bent beautifully, so what's not to love?
After we warmed up enough to go semi straight we did walk loops and towards the end ventured trotting across the diagonal between loops. We finished with  left lead canter circles which he aced. No whip and he transitioned up beautifully and despite being VERY forward he was also completely responsive and working with me, not trying to run or misbehave. I was ecstatic. It's like night and day when this happens. When it hit last spring it came out of the blue and it wasn't even after a move in that case. I just went to the barn one day (at Cheryl'e) and he was like that. Go figure. We set out Oct. goals which I'll post soon.
Email Post
Labels: dressage training energy level horse training

Carol said…
If we get a good winter we can get in lots of trail riding, but sometimes winters here get rain on top of snow and then freezing, so we can look at weeks of ice sheets everywhere. Not good :(
I'm watching your horse shopping with great interest and enjoying the vicarious experience!
October 8, 2010 at 4:28 AM

Jan said…
Carole, What a great ride! Yes, Rogo had such good energy! And responsiveness- the most wonderful combination of all. Clearly, he was feeling good! Interesting to see the view out your window- sad that it won't be Rogo for a little bit, but how beautiful is the water!
October 11, 2010 at 4:35 PM