Doug and I had a really fun weekend. We left our trailer parked at Cheryl's when we took the horses over. It has living quarters, so this weekend we went over on Sat. and stayed all night. We love camping and we love riding, so we combined the two. We took all three dogs. That decision wasn't quite as bad as it sounds. We cleaned out the horse trailer part and put in a fresh bag of shavings, so we could put them back there to play some of the time. They sleep in the trailer and hang out there some, but they're pretty good.
I had a lesson on Rogo on Sat. afternoon and a lesson on Dan Sun. morning. Also, we cleaned tack, trimmed manes and tails and generally had a relaxing time.
Doug made me a birthday meal since I was in Halifax on my birthday - seafood pasta and chocolate walnut birthday cake. I love chocolate walnut cakes. Mom made me one too, from a recipe she's made me for years, and I ate it with mint chocolate chip ice cream - my favorite desert! Here is a picture of the cake Doug made me: 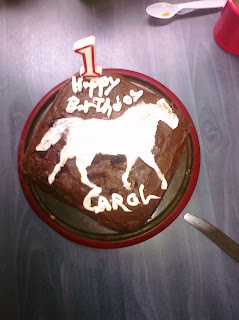 For my lesson on Sat. with Rogo we rode inside (it was raining) and we worked on bending a lot. First walking loops to the quarter line and back. I have to remember to exaggerate the bend at this stage and also to to a direct rein, take and give. My tendency is to do an indirect rein of opposition when I feel he isn't bending well and it interferes with his rhythm / stride length. Also I hold with the inside rein too long (still). He is doing it quite well though. Then we worked on 15 m trot figure 8's. After I got into the rhythm of it it wasn't too bad, but the circle to the right needs improvement. He doesn't change bends as well going from left to right as he does from right to left. It used to be the opposite. Part of this is my fault as I don't time the aid as well as I could, but partly he needs to move off my inside leg better to the right and respond more quickly.
After this we did some canter and Cheryl wanted me to really try hard to relax and loosen my hips, sitting into him and keeping my upper body still. I've developed too much of a habit of  trying to push with my seat to keep him going, but I don't need to do that anymore. I was able to do it! Cheryl was cheering. Being stiff through my hips is my worst habit, so I think if I can improve this it will help a lot of things.
Riding Savanah bare back for months at one point really helped me with 'sitting in not on', but I lost a lot of that 'seat' when I started Rogo. I was nervous and his gaits are very different, but I'm no longer nervous and I'm used to his gaits, so it's time to get a nice relaxed and following seat rather than perching on him.
Doug rode Savanah after my lesson and they are doing great. I couldn't believe how well they did shoulder in and it was only their second time ever doing it. She marched along with big strides in perfect rhythm, while staying perfectly straight and on three tracks. I had to try it after he rode, and she did it for me too. She is so sensitive to the aids. I love it!
Dan and I focused on getting him to drop his head and take contact. He got short strided on one side at the trot after riding for about 20 minutes, so I'm going to have to keep an eye on it and work mostly at the walk for awhile to get him back in shape. My goal with him is to have him taking contact correctly on a month. Given that we've worked on this in the past I think it's reasonable.
Here are some pictures of Doug and I riding Savanah and Dan outside: 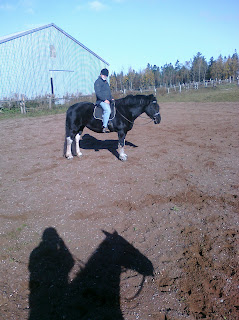 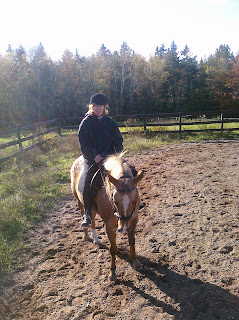 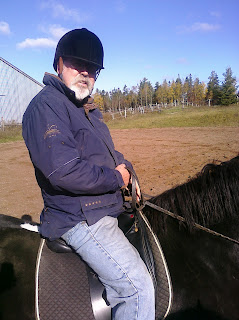 And here's a picture of Doug and Joan in the trailer drinking coffee and Baileys last Thur.: 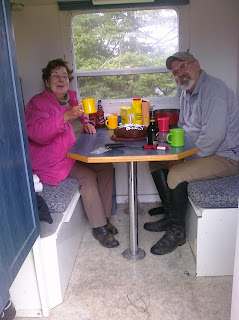 And here's a picture of our three dogs in the trailer - a chocolate lab, a yellow lab and an unknown who showed up at our door last Christmas and insisted on staying. They look evil, but the pictures were taken with my phone, so quality isn't an option :) 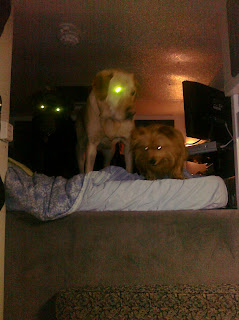 One final note - people remark how big Rogo is (not necessarily true by warm blood standards) and I just don't notice it because I'm around him all the time. After riding Dan though he seems gigantic. He's about 2 hands taller!
Email Post
Labels: dressage training lesson

Jan said…
Carol, What a wonderful cake! How nice of Doug to put Rogo on your cake as well :) Sounds like you had such a good session with Rogo. It's hard to loosen our hips at the canter- it has to be one of the hardest skills/techniques to learn. Your awareness of it is good - it'll probably help a great deal. I struggle with that as well. Keep up the great work you are doing on Rogo and Dan!
October 25, 2010 at 6:03 PM