How Is This Happening?

Poor Rogo. Doug says he is accident prone. I have to admit, he was very clumsy as a 3, 4 and even 5 year old, but he's much better now. Anyway, Fri. evening when I went to groom and tack him up, after a week of so much rain I'd only gotten one ride in, I found his right front leg bleeding from a small cut. The weird thing is, and I'd sure appreciate thoughts / ideas on this, is that it's the THIRD time he's cut this area on a front leg and all have been a mystery as to cause. The first time was the left front, then a few months later the mirror image of this cut appeared on his right front, and now, two years later, the same cut is back on his right front.
The vet said he'd never seen this before (after the second one appeared) - two identical cuts on opposite legs, occurring when Rogo was in  different locations (so it didn't appear to be his environment), and no visible cause. We even wondered if Dan, the Appaloosa, was biting him in play, although it didn't appear to be a bite mark. Now Dan isn't here (he's at Joan's), so he didn't do it. Savanah is the low horse on the totem pole and wouldn't bite (and it isn't a bite). It isn't a kick. It presents as sort of a puncture / cut. Here is a picture of it: 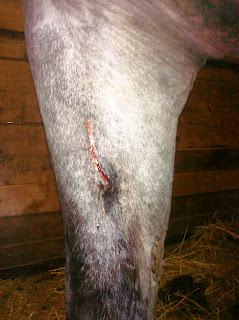 Could he be hitting it and slicing with a hoof when he's getting up? I've watched him rise, with this question in my mind, and he didn't come anywhere near his front legs with another leg. The first two times he wasn't wearing shoes, but now he is. There is a small nick in his left hind ankle that happened at the same time.
Although it is fairly innocuous this time when I found it right away, the first time he was at a boarding barn and I didn't get there from a Thur. to a Mon. and when I came on Mon. his leg was like a huge stovepipe, with rivers of puss coming out of it. He was off work for 6 weeks and went through two courses of antibiotics. So if I can find a cause for this and manage it in some way it would be a great help. It doesn't cause any permanent harm, but it sure would be nice to put a stop to it, or at least understand it.
Here's the care routine, so I'll remember dates and tasks. Every twelve hours:
On the bright side, the vet said Rogo is well muscled and very well behaved, which makes treating him easy. He has to stay in his stall to keep flies out of his wound, but starting today I can let him out at night in their grassy area (not the sand riding ring).
We had a great time on our one ride - I did three loop canter serpentines twice. He did them easily - Yeah Rogo! Then I put him on a 20 m canter circle which I picked up on the long side (not a corner). As we cantered I pushed him into the outside rein and bent him slightly in - thinking I was doing the exercise from dressage camp. Guess what? He'd been counter cantering and did a perfect and instant flying change when I applied the aids! Wow - my first flying change since I was a teenager. In reading Kyra Kurkland's book I see that this is how she introduces flying changes - she counter canters a 20 meter circle and then asks for the change, so I think this won't be too hard for Rogo. I won't do it again though until I have some instruction as to when to teach it. I want to make sure I don't screw up his counter canter, although he seems to understand the difference in being asked to counter canter and being asked to change, at least in this one instance :)
Remember - please send me your thoughts, ideas, experiences if you can help me solve the mystery of Rogo's inside front leg cuts. Thank you.
Email Post
Labels: dressage training front leg cut Rogo's firsts wound

Barbara said…
Nina swats flies on the inside of her legs with the opposite foot. It is rather haphazard looking. Could he be cutting it with a shoe clinch or with a sharp edge of an unshod foot? Bell boots might fix that. I realize this sounds unlikely - it's all I've got.
August 14, 2011 at 7:59 AM

Calm, Forward, Straight said…
I agree with Barb - it looks to me like a hoof shaped cut. Maybe he's kicking out at bugs? That could explain why it looks identical to previous cuts... did the other incidents happen at the same time of year?
August 14, 2011 at 8:11 AM

TeresaA said…
my first thought was he was doing it to himself with his shoes. But it's so high up. Unless he's doing it when he rolls or laying down to sleep.

Oak Creek Ranch said…
My initial reaction is that it is from his shoes as well. Are there any sharp pieces of nail poking out of the other shoes (I'm sure you've checked that but its what came to mind).
August 14, 2011 at 10:28 AM

TBDancer said…
Check the nails on the shoes. My shoer is a stickler for making sure the nails are clinched down well and smoothed off, but it could also be a sharp edge or just the shoe itself. Personally, I HATE when there is a "mystery 'gow'" that recurs. I had a QH filly years ago who tore first one eyelid and then the other. Never did find where she did it, and the vet stitches her up (twice) with no damage done. She wore racing blinders after that. ARRGH.
August 14, 2011 at 10:38 AM

Carol said…
Thanks for all of these ideas. The first two times it happend he wasn't wearing shoes. Also the first time it happened was in Feb. when there weren't any flies.
It does have a bit of a curve to it though, like a hoof. I've seen him 'sitting' in the sand trying to scratch bites on his belly and around the inside of his back legs. Maybe this would do it? It woundn't explain the Feb. incident unless he was just in that position by coincidence. Also, it's kind of high up on his leg for this to be the cause.
Anyway, thanks everyone. It must be related to a hoof hitting it. I just don't know how.
Teresa - you'll have to tell me about Itish. I sense some stories!
August 14, 2011 at 10:43 AM

Val said…
Now I have found your blog! Your Rogo is gorgeous.

There are a lot of good ideas already on the table, so I am just going to throw this out there. Could it be a sharp tooth? Like maybe he rubs his nose or goes to nibble an itch on his chest or leg and slices himself. The edges of the incisors can be very sharp.

I hope that you determine the cause soon, as that sounds like a rigorous nursing schedule. I liked your description of Rogo's first flying change. My previous post was about flying changes. Thanks for joining my blog!
August 14, 2011 at 5:36 PM

Bif said…
I've seen them on hind legs from kicking at flies, but not so fare forward on the inside of a front... But it does sound as if he is kicking himself somehow.

Grey Horse Matters said…
No sense repeating what everyone else said. It's the same thoughts I had.

Sounds like you had a pretty nice ride. Hope you figure out these injuries of is, they do seem a mysterious coincidence to happen the same place all the time.
August 15, 2011 at 1:49 PM

Achieve1dream said…
I have no idea about the cut, but I share your pain. Chrome has another cut on his neck, but it's further down and not on his throat at least. It is swollen though. I really don't want to have to put him on antibiotics again. He's been on antibiotics more than any horse I've ever had all combined lol. Chrome seems very accident prone too. I was hoping he would grow out of it soon . . . thanks Rogo for dashing those hopes hehe. I hope he heals up quickly.