You Aren't Going To Believe This

The dressage camp is wonderful. That isn't the part you aren't going to believe. I'll get to that part in a moment. First I want to tell you about how the camp is organized. I'm having lessons with the other woman who co-chairs our dressage club (R.I.D.E.R.S) with me. In the morning we start early (8:00 am) with a lunge lesson with Jane Fraser who is locally famous for her lunge lessons. I can honestly feel a difference already. I don't want to jinx myself, but I think I'm getting my heels down more consistently. I get lunged on a school horse, not Rogo. It's very tiring but great.
Then we watch lessons for a few hours, given by Cindy Ishoy who's flown in to give a clinic. Her linked bio is well worth reading. She's an eight time Olympian and an Olympic medalist. As you can imagine, the atmosphere is heaven. We're over-looking a bay in the country, a small group of women of all ages who share a passion for dressage, and all day is spent riding, talking, and learning dressage. The meals are all home cooked right here, and are to die for. Last night was scallops, tonight was a curry chicken casserole, tons of salads, sides, etc. and somewhere in there I pigged out on strawberry shortcake. If there is a heaven, this is it.
Back to the lesson - we have a lesson with Sue Fraser in the afternoon. Her bio is also impressive and  well worth reading. I ride Rogo for my lesson with Sue. She is getting me to get more out of him than ever before. Although I'm pushing him to go more forward and work harder, he doesn't mind it. He isn't cranky about it at all. I wonder if he likes the sensation of discovering his power as he starts to come rounder and more forward? He's giving it his all, bless his little heart. It can't be easy for him, because without a teacher I just didn't have the confidence to push, and always erred on the side of caution. Now he's being asked for more and as he responds I'm astonished by the power and gaits that emerge.
This leads me to the unbelievable part - today's lesson with Sue. There were severe thunder storm warnings in effect, and we heard thunder rumbling as our lesson started (indoors). We were just getting warmed up in the walk when the rain hit the roof with a roar. It came in waves, in such a way I haven't heard before - crashing into the roof, subsiding and crashing into it again, all in seconds. This unnerved Rogo (it was his second time in there and second day here) and he jumped around a little, but only for less than a minute. I just kept him working, but instead of walking along the sides I circled him. Then the thunder started in earnest. By now Rogo wasn't jumping around, but I thought the lesson might get canceled. Instead Sue put a microphone on to talk over the roar and we continued. The noise mounted and the lesson went on. As I rode, I thought "I'm never going to forget this, this is a ride to remember". It felt wild, and instead of feeling scared I felt like it was the chance of a lifetime to ride through a storm like that, in an indoor, with a great teacher. How often do things like this happen?
We were trotting now, asking for big trots, lengthening down the long side. The atmosphere was almost otherworldly, the thunder and lightening coming at the same time and at times pretty much continuous. It got to the point we couldn't hear Sue even with the microphone - I'd catch sporadic words or ride over to her to ask what she said. Everyone had gathered to watch, but I was only vaguely aware they were there. Then we cantered and Sue wanted Rogo more in front of my leg. We're cantering through this roaring thunder and Sue is yelling to me to tap, tap, tap him with the whip and get him using his hind legs. I was afraid he'd use his hind legs to throw me over his head, but my brave big boy just went to work harder and ignored the noise. At one point the lights went out and we were almost in darkness, even though there are lots of sky lights and side lights. They came back on though and we continued. Wow. What a day and what a ride.
Doug and Mom had driven down to watch today of all days. It unnerved Mom some, but I'm glad Doug saw it because he wouldn't believe it otherwise. I like that he sees what a good boy Rogo is.
Here is the only picture that is light enough to see anything: 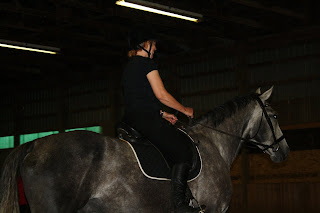 Here's one of Alison in her lunge lesson yesterday: 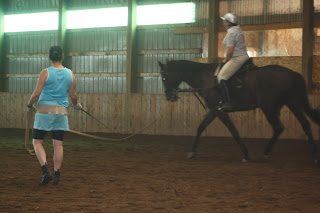 You an see the difference in the light level even though they are both taken in the daytime.
So that's my report on dressage camp days 1 and 2. I'm learning lots, enjoying it more than I can say, and had a wild but wonderful ride today.
Email Post
Labels: clinics conditioning dressage camp dressage training Rogo's firsts thunder storm trot

Calm, Forward, Straight said…
Wow Carol - what an amazing ride you had! Great job keeping your cool - I'm sure that's why Rogo was such a good boy. What an awesome horse you have.

And also thinking that part of my blog that will interest you most is Rounder:
www.rounderdressage.blogspot.com

Jeni said…
Hi Carol - sounds like you are getting much more than you expected out of this clinic. I'm so happy for you!

Jan said…
Carol, Wow! What a day and ride you had! What a test of Rogo and what a testament to his wonderful strengths! For him to be able to respond to your increasing demands (before the storm ride) says a lot about him- all good. And for him to stay working, and listening to you when that huge storm was going on all around him- how very intelligent, and courageous and trusting he is! That was an incredible experience! Good, good Rogo (and you!).
August 12, 2011 at 6:41 PM