Rogo has me completely mystified. After telling you how forward he'd become, and how I could hardly hold him in at the schooling show and test riding clinic, he completely died on me at our Equine Canada bronze show a couple of weekends ago. In Training Level test 3 he literally went slower and slower, while I kicked and whacked him, until he gently and softly came to a complete halt. It wasn't bracey or balky feeling - just a slow winding down to nothing. He blew through three moves with this (he was supposed to be cantering as he trotted slower and slower and then stopped) and the rest of it wasn't much better. I noticed in the warm up that he was losing energy, but this was beyond! We ended up with a 49 and I think that was generous.
His shoeing had gotten off and thus his gaits weren't good prior to the show. I barely rode him for 2+ weeks and then at the walk. The day before the show the third trip from the farrier put everything right. It's amazing what shoeing can do. So that night I decided to go and off we went, getting there late. I also rode Level 1 test one and it wasn't much better 51.5 and NO energy.
The next day he rallied for a 64.8 in Training Level 3, and a tie for first which we missed out on because of the collective marks. Then he completely stalled out again, getting 55 on Level One test one.
I'm not sure what was going on and I porobably never will. I hadn't thought we'd be in top form after the time off, but I wasn't expecting that either. He still doesn't have the forward he'd had, but it's better. We (I?) had tons of fun at the show, so it was a good weekend anyway.
Meanwhile, MY foot got so painful I could hardly ride and had to cancel going in the Cindy Ishoy clinic this past weekend. Turns out I have Morton's neuroma, a very painful condition where the nerves in the ball of your foot become irritated and putting your foot in a stirrup is agonizing. I got so I couldn't keep my foot in the stirrup. A cortisone injection seems to have fixed it for now, but it may come back and may need surgery :(
Here are some pictures of the show. I think he looks better than we were :) 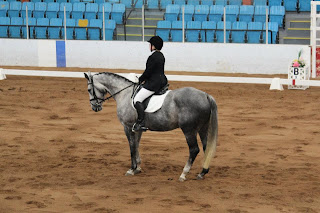 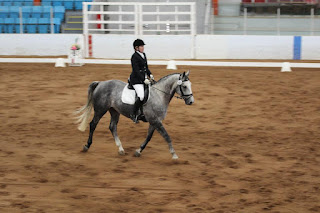 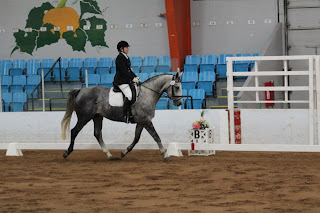 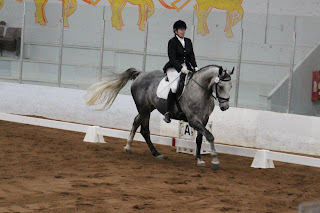 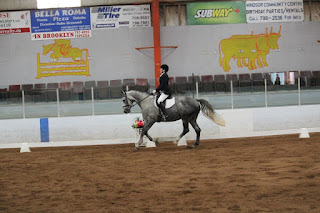 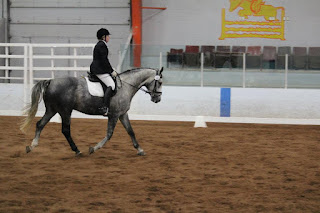 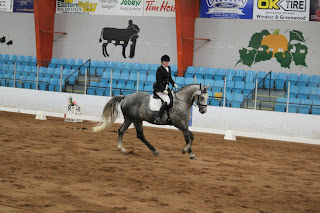 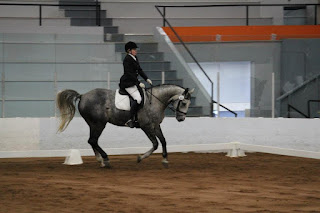 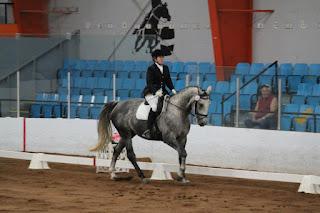 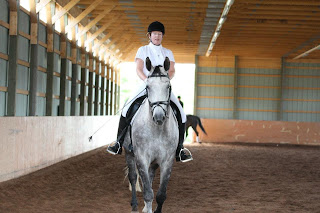 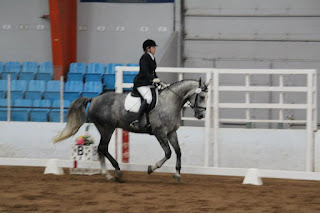 Grey Horse Matters said…
You two look great together in the pictures! Sorry to hear about your foot that must be painful. Hope the cortisone fixes it. Anyway, there will be other shows. Who knows what he was up to for this one but at least you still had fun.
July 2, 2012 at 6:03 PM

Calm, Forward, Straight said…
So sorry about your foot Carol. Fingers crossed that cortisone takes care of it and you can avoid the surgical option.

That's really mysterious about Rogo at the show. Hoping you get to the bottom of it, or better yet it never happens again.

in2paints said…
If nothing else, you both look wonderful out there! It's always frustrating when they perform completely opposite of what you expect, but I'm guessing this was just a small rebellion and he'll be back on track the next time!

Story said…
The pictures are beautiful, you'd never know he was testing you. I hope your foot feels better with the injection, surgery never sounds fun.
July 2, 2012 at 11:24 PM

appydoesdressage said…
You guys look really nice in your pictures! Good luck figuring him out :(
July 3, 2012 at 5:10 AM

Kelly said…
You both look super in the photos! My guess would be the two weeks off prior, due to the shoeing issues, may have caused some decline in fitness? Hoping the forward returns quickly!
July 3, 2012 at 5:46 AM

smazourek said…
Is it possible you could have been bracing and stiffening your body because of pain?
July 3, 2012 at 7:28 AM

TBDancer said…
I too had Morton's neuroma (right foot) and several cortisone shots (over a period of years) fixed them. I also stopped wearing heels (I was a teacher and this was in the days of dress codes) and flatter shoes fixed the problem as well. A friend had the surgery and she complains to this day of the numbness.

As for the Rogo, I'd start with an expert's opinion--talk to the vet. There may be other things going on unrelated to shoes, two weeks off or your own foot problem. (Been THIS route, too).
July 3, 2012 at 8:56 AM

Carol said…
Thanks for the feedback everyone. I'm pretty sure that my pain (causing tension) and Rogo's time off contributed to his lack of forward. It ws too much to be just this though. I've consulted a vet about it a couple of times in the past when it was an issue and we tried various feeding programs and supplements to no avail. If it returns or doesn't continue to improve it will be time t talk to a vet again. I'll see how wee make out though with both of our feet back in working order :) Thanks for the feedbakc and nice comments!
July 3, 2012 at 9:05 AM

Achieve1dream said…
How bizarre... could it have been hoof pain from the recent shoeing?

Regardless I'm glad you had fun and you both look gorgeous in the pictures! That's all that matters right? Hehehehe!