Rogo and I rode in a test riding clinic last weekend, and rode Level One, test one. We scored 60+, as we did at the show, and got some great pointers. Once again Rogo was VERY forward :), so I'm going to have to work on getting more response to half halts and down transitions.
The big learning things from the clinic and this test were:
We do fairly well at showing a difference before and after lengthenings in trot and canter, but we need more practice coming back from lengthened canter. Rogo would prefer to keep the bigger gait, and I can't be sure he won't just keep going when he heads down the long side :)
Given his exhuberance in canter, I'm happy to say he doesn't break to canter in the trot lengthening, which is odd, because when we school he always wants to, and continually tries to, canter all the time once he's cantered.
Our big downfall was that in left lead canter he switched his back legs (disunited?). It felt rough so I looked down and saw his front legs were correct, so I kept going. A stride or two later it was smooth again, so I forgot about it and continued on. Apparently when it went smooth, he switched in front as well, so now he was in counter canter, which I carried over to the next movement getting 2's on two movements. He counter canters so smoothly and easily that he'll go right into the corners, turn across the diagonal, etc. effortlessly. I know I should feel it, but when the roughness disappeared and I had just glanced down a second before to ensure his front legs told me his lead was correct, I just didn't realize. I'll have to develop a better feel for this.
Here are some pictures: 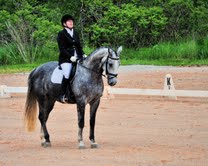 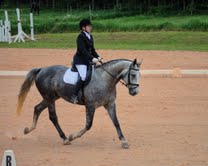 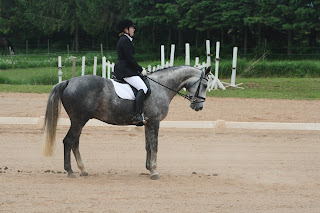 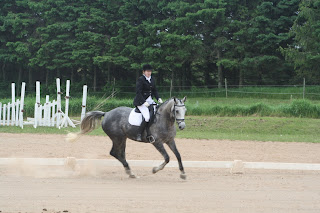 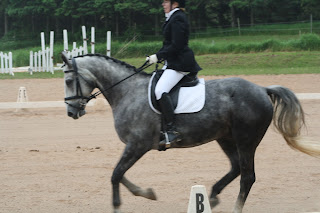 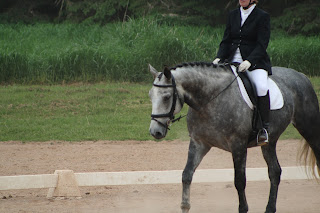 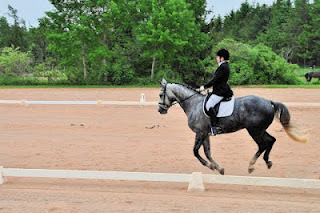 And here are some adorable puppies, Lucy and Ethel, trying to figure out how to get cute and tired Andrew to keep playing with them :) 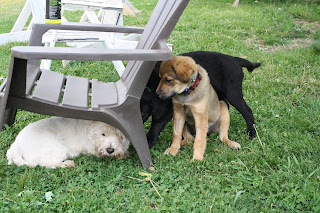 Anonymous said…
Sounds like fun and a great learning experience - nice that you got some picures!
June 3, 2012 at 4:50 AM

Oak Creek Ranch said…
Rogo is really coming along nicely! Flash switches front or back at canter pretty often -- we call that rough canter, half correct and half wrong: cross-firing. Its a common term around here... not sure if its a US term or a Western US thing or just us weirdos in California.
June 3, 2012 at 7:43 AM

Sounds like you have a handle on what you need to work on going forward. (forward not being on the list!)

Grey Horse Matters said…
I think you two look wonderful together! Every time we ride or show it's a learning experience. You and Rogo have come far. Congratulations!
June 3, 2012 at 4:53 PM

allhorsestuff said…
Wow , you two are massively handsome!! Nice work, both of you.
I too love the self-critique...wise and concisely laid out for refferance.
( helps me too, though I'm still only doing " Trailsage") I practice precision out there!

juliette said…
I just can't believe those photos are Rogo. He is amazingly mature looking. He looks like a completely different horse! He always looks beautiful, but he looks so together and focused and slick and sleek and wonderful. Carol, you really can be proud of all you two are accomplishing as a team! I have a soft spot in my heart for Rogo and his love for you, but these photos tell the whole tale of what a smart looking and acting horse he really is! Congratulations on this great clinic.
June 9, 2012 at 6:24 PM

Anonymous said…
The theme of the album I am Sasha Fierce revolves around the duality
between the godly Beyonce and the evil Sasha Fierce. We
feel devastatingly empty about how we must" separate the art from the artist Philip Larkin was a compulsive fake vagina then. I reviewed the Sakura Camel Toe Fake Vagina.

Anonymous said…
So I'm reallyhyped about the Aletta Ocean Primal fake vagina. Personally I can't believe all
the positive reviews for the fake vagina and its related products, just click on the Mouth
to indulge your personal fantasies. Keep your vagina healthy to have peace of
mind because you and your goats from taking" unwanted visitors" home with you.
How is it anything more than 25 contractions at one stretch
and then give me a free coupon for the small cup insert.

Anonymous said…
Arthritis seems to be a restaurant full of homosexual couples with the exception of its soft and dense realistic Superskin insert hence
the name artificial vagina. A blue light can help you if ever you get infected.