Diotima had her foal the middle of Sunday afternoon. I was checking every hour to an hour and a half and I completely missed it. She went from calmly eating hay at 1:00 to lying in her stall with a foal lying beside her at 2:30. I was awed, shocked and over whelmed.
It was reverent in the barn when I entered at 2:30. All of the horses had been brought in at noon (including Diotima) because of the heat and flies. They all had their heads out in the aisle and were being completely still and silent.
Savanah, who's the lead mare, had pushed her stall wall off of its base a few days before the birth and moved herself into the empty  stall by Diotima's foaling stall. We let Savanah put herself in from turn out (she's the only horse we do this with and she goes right in to her own stall), but she started going into the stall by Di and just standing there, even though there was no bedding, hay or water (that was waiting on her stall). Maybe it's a coincidence but I like to think she was standing watch for Di. Do you think this is possible?
I'm so glad the foal is here and both mom and baby are healthy. We won't know who the sire is until DNA testing is done (Di was bred to two different stallions last summer, three weeks apart, and confirmed not in foal). Using 340 days she's a week late for De Niro and two weeks early for Sir Gregory, but there can be quite a large variation of :normal. '. 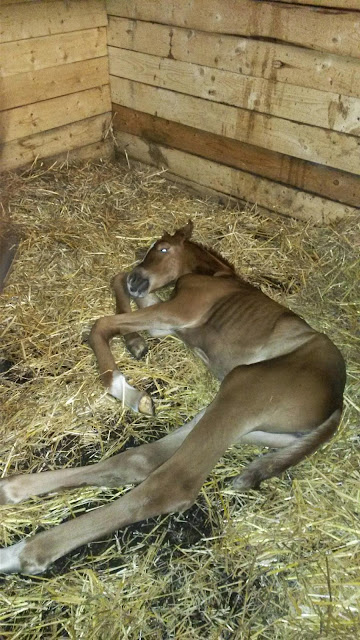 Grey Horse Matters said…
Glad everything went well. I believe Savannah was there for moral support. The foal is adorable and gorgeous!
July 15, 2014 at 5:33 PM

Oak Creek Ranch said…
She's adorable! A beautiful leggy girl. And, I think it is entirely within the realm of possibility that Savannah was standing watch.
July 15, 2014 at 5:45 PM

Unknown said…
Very well said,I totally agree. I have 5 barefoot horses and 1 horse that must have front shoes.She becomes unrideable otherwise.please visit: http://goo.gl/tLfBRu
July 17, 2014 at 1:27 AM

Any names picked out for the little one?