I'm still a little giddy :) over Rogo's progress, and how he went at the clinic last weekend.He's really come a long way over the winter. The clinic was perfect for 'crystalizing' our winter gains and setting the stage for spring.
The weather couldn't have been nicer. We got a pet sitter for the pets at home and Doug and I stayed in the trailer at Fraser Equestrian Center Thursday and Friday night. It was 26 C. on Thur.! We were sitting in the trailer Thur. evening with a friend, sipping wine and chatting, with the door and all the windows open. This would be extremely unusual for May, and unheard of for March.
Thur. I had a lesson and Fri. and Sat. I rode in the clinic. Thur. was Rogo's first lesson outside for the year. He was very exuberant about that! 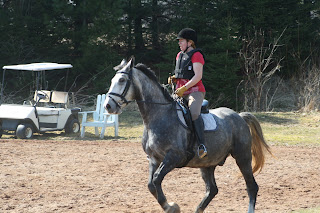 He managed to control himself except for this one minor hop that Doug caught on film (now if I could just learn to control my facial contortions). After about twenty minutes of not getting much from him but "I want to canter now", Sue suggested I lunge him. He just wanted a good gallop in each direction for about two minutes and he was fine. Here he is blowing off steam. Check out the bare arms - it was hot! 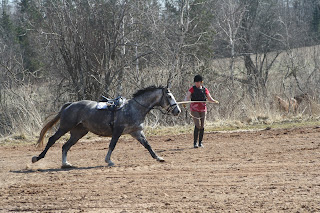 Then he settled down for a good lesson on basics - nothing fancy for out first day outside. 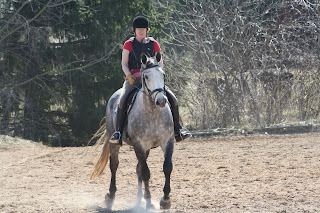 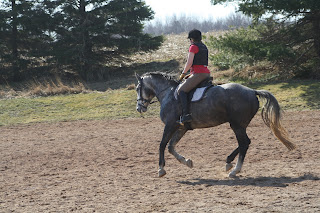 We did walk and trot circles and serpentines, and canter circles, working on bending and suppleness.
The clinic started the next day and I was nervous. I'm not sure why, because it isn't a competition, but I was a little on edge. I wanted Cindy to see what a good boy Rogo was, and we are at this crossroads right now. In my mind it could have gone either way - he could have been great, or he could fight the contact throughout the ride and try to run off in the canter.  It's only been in the last week approximately that he's gotten steady in the contact and (mostly) stayed with me in canter. Even my last post is lamenting the canter work, but that has improved by leaps and bounds since then, no pun intended :)
Cindy starts each lesson by asking the rider what they are working on. I told her where we were and then we went right to work in trot, circling at each end and then doing serpentines. She told me to shorten the reins several times. After he got warmed up we did sitting trot on a circle and did a lot of trot walk transitions. I found I could sit to the trot better on this day than most days, as I could at the last clinic. Can I dig deep and find this ability when she isn't there? I hope so. Doug was watching and told me it looked good.
Cindy also reminded me several times to keep my outside hand down and she had me hold the strap on the front of my saddle with my outside hand from time to time, in order to get the feel of the steady, low outside hand. She had me really reinforce, as Sue does, the right bend. At first it felt to me like I was over bending him, but I soon felt him get lighter and more responsive to the right.
We did an interesting 10 M trot circle exercise - start at the first letter of the long side doing a 10 M circle and on the letter side of that circle do a straight line to X (it's a 40 M ring), do another 10 M circle and on the open side of that circle do a straight line to the end letter and 10 M circle again. It calls for lots of bending and straightening. Cindy reinforces the importance of the training pyramid and we heard lots about rhythm and suppleness throughout the clinic.
About half way through the first lesson I was trotting along and it dawned on me - we were doing it. I mean we were staying forward, keeping a good rhythm, Rogo was using his hind quarters and keeping a good steady contact with the bit, we were focused and following instructions - Yeah! We weren't going to blow it! I had a lovely young dressage horse under me and we were going through a great lesson without any undue difficulty. This is huge for us and really as I write this I'm thinking I need to break open some bubbly soon to celebrate.
The canter work went well. He transitioned, took the correct lead, steered easily, went into corners and did circles, crossed the diagonal and transitioned to trot nicely with a good corner, etc. The second day Cindy had us do more walk trot on a circle and then sit the trot and canter as we crossed the center line of the circle. Rogo aced it every time.
For leg yield we circled at the end and then did sitting trot up the center line and leg yield to the wall. We did much better with me sitting. We did lengthened stride in the trot, either down the long side or across the diagonal and Rogo did his best lengthening yet.
Here are a few pictures of the weekend. I have some video too which I'll post soon so that I'll have a record of where we are. 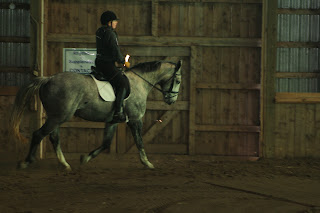 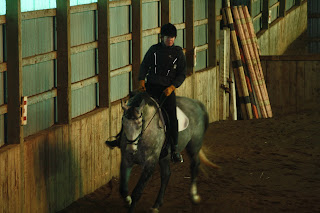 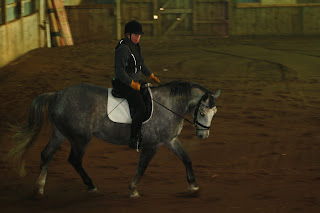 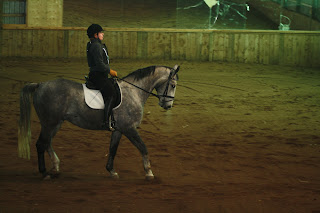 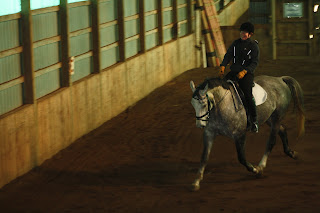 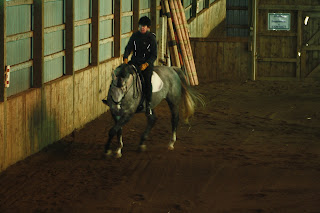 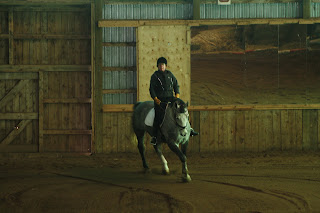 in2paints said…
Definitely pop open the bubbly! It feels so good to make progress like that, and you both look fantastic in those pictures!
March 27, 2012 at 8:20 PM

Anonymous said…
Sounds like a great experience for you both, and nice to see the beautiful pictures! You do have a lot to celebrate!
March 28, 2012 at 2:59 AM

juliette said…
Congratulations! Sounds like you two had a wonderful clinic. Rogo is so beautiful in the photos!
March 28, 2012 at 3:41 AM

Val said…
You and Rogo look so pro!

Thanks for sharing your great experience and huge milestone with us. The photos are stunning.
March 28, 2012 at 9:00 AM

Anonymous said…
Rogo's face in that first photo is priceless! Beautiful photos, Sue. You really do have a lovely young dressage horse. Congratulations on all your hard work - I can tell it's really paying off!
March 28, 2012 at 10:52 AM

Grey Horse Matters said…
You and Rogo are looking good. What a great experience. Definitely get that bubbly uncorked!
March 28, 2012 at 1:56 PM

Calm, Forward, Straight said…
Hoping you broken into the champagne by now!!

Congratulations to you and Rogo - you both deserve to celebrate. Your hard work and perseverance have created such a lovely partnership. Really enjoyed the pictures - looking forward to the video! :)
March 28, 2012 at 4:49 PM

Margaret said…
I've read your past few posts. I am so interested in dressage, but I am just new at riding again and have a young horse (4) green broke. Hard to imagine I will one day understand all of this. Do you have a favorite horse magazine you read?
March 28, 2012 at 8:30 PM

Carol said…
Thanks so much you guys! Greatly appreciated. It's fun to share our adventures with you.
Margaret I read Dressage Today as a favorite horse magasine. I hope I don't make dressage sound overly complicated. Done well, it isn't. It's about learning really good basics. The language around it sometimes makes it sound more complicated than it is. You'll do great!
March 29, 2012 at 5:26 AM

Jan said…
Carol,
What a great clinic you had! Rogo is wonderful and talented - and you both did wonderful!! Good to have these times - and cherish them. Give Rogo a big hug from me!!
March 29, 2012 at 9:18 AM